I am a Jamaican living in the USA. But what does it mean to be Jamaican? For me, this means that I am a hybrid. Partly old, fully new. I could never have existed as I am without being in the New World. My identity is a hybridization of both European and West African cultures. A little of Europe, a little of African, and a lot in between.

Jamaicans have been called many things and the word that should be at the top is talented. In the midst of all the chaos, you will always find a Jamaican being extraordinary. Andrae Green is a Jamaican painter based in Massachusetts. He is also a father, son, brother, and father of two.  Although Andrae’s work is no secret, I only bumped into him on LinkedIn a few weeks ago and was in complete awe. His collections will stop you in your tracks, forcing you to consider the meaning behind his work.

Andrae Green’s paintings have been shown internationally in the US, Jamaica, Canada, China, and France. In 2012 he was one of the first two artists chosen to represent Jamaica in the Beijing Biennale. In 2013, Green was selected as a part of the American delegation that represented the US at the Salon de Société Nationale des Beaux-Arts, at the Carrousel du Louvre in Paris, France.  In 2019 he was an artist in residence at Experience Jamaique in Geneva Switzerland. Green’s paintings are included in many private collections around the world. In 2017 his piece “Acquiescence I” was acquired by the National Museum of China.

Andrae was raised in the Waltham Park area in Kingston and is a proud Calabar alumnus.  He only decided to take up painting during his first year at Edna Manley College but was always drawing images out of comic books; something his mother encouraged but was thwarted by his father’s conservatism. Art was never positioned as a career choice, so he never had intentions to become a painter. He failed forward which makes his experience so profound.  He is a self-taught musician and played the keyboard and performed in many of the West Indian churches in the Flatbush area and has tried accounting and other fields, only to be led straight back to art.

Andrae describes his art as “working out his demons and figuring things out”. He is asking honest questions about himself, and this translates into his paintings. He is taking the time to study physics and philosophy and finding the possible answers through paint. He explores critical theory and phenomenology, searching to understand how the mind and memory work, and many of his paintings include his memories of Jamaica and his late father. His father passed away over twenty years ago, and he never truly healed from that pain. In some way he has been using that pain as a catalyst for his art; unfortunately, his father never saw his work, but he likes to believe that he has. 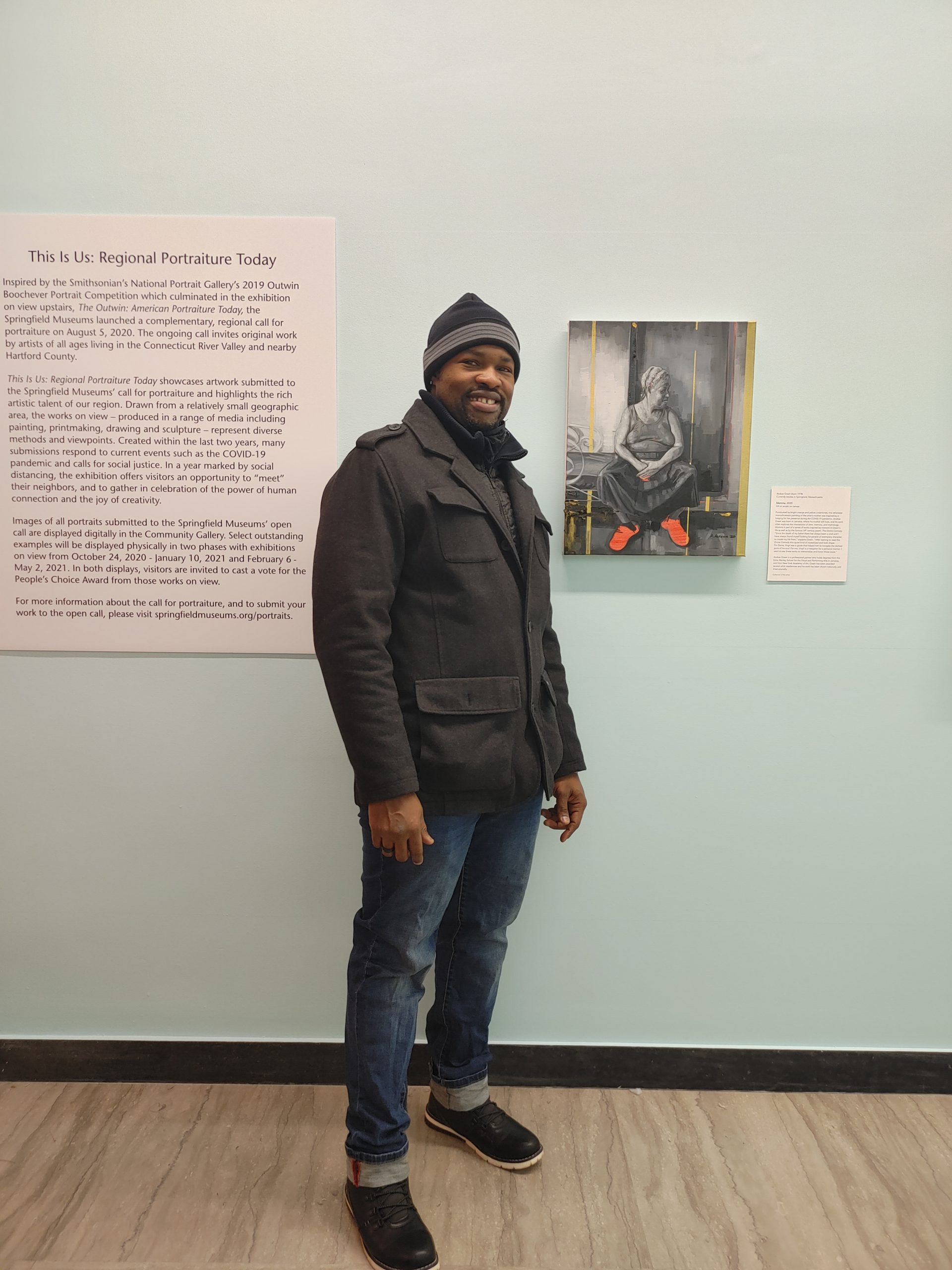 Andrae’s gift made room for him, and his exhibitions literally fell into his lap.  They weren’t goals he set for himself, but he is grateful. His process involves allowing his imagination to feed his creative fire. He believes that our imagination is a creative force or a fire that we must feed with thoughts and interactions with people because we are social animals.  He states that his blank canvas is like the great equalizer, the white canvas is the test that determines what’s on the inside. He then takes that fire that allows him to scribble, and the musings take life into larger paintings.  He believes that everyone’s process is different, and his is more visual. He also likes to know what’s current, so he goes to Instagram; studying how people visualize themselves in this day and time.  He states that “you don’t want your work to be anachronistic.  As an artist, a part of your job is to archive where you are (from a specific point of view.)” For Andrae, he is male, 42, conservative, grew up in Jamaica, living in Massachusetts, married to an Indian woman with two biracial children, and wants to portray what his world looks like this time. (***)

His advice to any artist is to “Work on your product and that means as an artist, you are the product, everything flows out of your life – thoughts, habits, and proclivities. Be self-aware, minding yourself, but also appreciate things that are intrinsically you. There are no two people who think the same, and the best artists really key into that to offer others a more universal experience so we all can share and be richer for it. We are living in the most profound time, and we can use social media and the internet according to your mission. So as an artist, figure out what your mission is, what do you want to do, and how do you make the world a better place, and people will find you.”

You can view some of Andrae Green’s work on his website: www.andraegreen.com or follow Andrae on Instagram @andraegreenstudios. His latest exhibition is being held at William Baczek Fine Arts in Northampton. Massachusetts.