By Neal B. Abraham, DePauw University 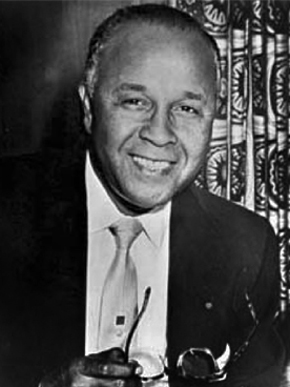 Percy L. Julian (1899–1975) was an internationally acclaimed synthetic organic chemist. Only the third African American to receive a Ph.D. in chemistry, he specialized in the field of natural products chemistry, the identification of active chemical components of extracts from plants, and the synthesis of those components in the laboratory from smaller molecules. This technology is very important for medicines, food products, paper, paints, and fire-fighting foams, among other things.

Percy Julian was born in Montgomery on April 11, 1899, the first child of James Sumner Julian, a U.S. Postal Service railway clerk, and Elizabeth Lena Adams Julian. His grandparents were sharecroppers after emancipation. As did his parents, he completed the allowed eight grades of public education available to African Americans in Alabama’s segregated schools and then attended two years at the Lincoln Normal School, a teacher’s college in Marion, Perry County, from which his parents also graduated, which later became Alabama State University.

Percy Julian at DePauw University in 1916, he enrolled at DePauw University, in Greencastle, Indiana, having been referred by Joan Stuart, a teacher at the Lincoln Normal School who had taught both Julian and his parents. Welcoming Julian to DePauw was a junior student, Kenneth C. Hogate, whose father was Joan Stuart’s friend. Hogate arranged room and board at the Sigma Chi fraternity house for Julian in exchange for his waiting on tables and stoking the furnace. Hogate later became long-time editor of the Wall Street Journal. Julian later recalled that his meeting with Hogate was the first time that he had been extended and shaken the hand of a white man.

Because he had the equivalent of a 10th-grade education, Julian was enrolled as a “sub-freshman” for his first two years at DePauw, taking college courses by day and pre-college courses at night in the Indiana Asbury Academy (DePauw’s prep school). After completing the pre-college courses, he decided to major in chemistry, though he had not seen a chemistry lab, except through the windows of the white high school in Montgomery, until he got to DePauw. During this time, Julian’s father transferred to a position on the Pennsylvania line, which ran through Greencastle, and moved his family to Indiana. All of the five other Julian children would graduate from Greencastle High School and attend DePauw University and go on to achieve graduate and professional degrees. 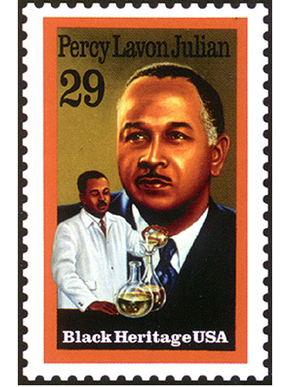 Percy Julian found the atmosphere at DePauw generally supportive, although he did encounter racial prejudice from some professors and fellow students. He received his A.B. degree in 1920, graduating as a member of Phi Beta Kappa and as valedictorian. Despite the best efforts of his faculty mentors and his outstanding credentials, Julian was unable to gain admission to graduate school. Instead, he accepted a teaching position at Fisk University, where he continued to study chemistry by gaining access to the whites-only library at nearby Vanderbilt University with the help of DePauw graduate and Vanderbilt professor George Clark. In 1922, he enrolled at Harvard University with support of an Austin Fellowship (a special scholarship), receiving a master’s degree in 1923, but his graduate mentors refused to let him enroll for a doctoral degree.

From 1926-1927, he served as professor of chemistry at West Virginia State College in Institute, West Virginia, and then was appointed head of the Department of Chemistry at Howard University in Washington, D.C. There, Julian instituted reforms aimed at creating a strong research-based curriculum. In 1929, he received a Rockefeller Foundation Grant to study for a Ph.D. at the University of Vienna, becoming in 1931 only the third African American in the world to earn a Ph.D. in chemistry. He returned to Howard University, where he continued his curriculum reforms and finalized plans for a new chemistry building.

In 1932, Julian returned to DePauw University with his fellow University of Vienna chemistry graduate, Josef Pikl, to launch a new research program in the synthesis of natural products, publishing 11 articles in the Journal of the American Chemical Society, many of them with student co-authors. Their laboratory efforts resulted in the first total synthesis of a natural product completed in the United States, that of physostigmine, an anti-glaucoma drug extracted from the Calabar bean.

Percy Julian married Anna Roselle Johnson, of Baltimore, Maryland, on December 24, 1935. They settled in Oak Park, Illinois, and had two children. Julian left DePauw in 1936 to accept the position of director of research in the Soya Products Division of the Glidden Company in Chicago. During the next 18 years, his research led to more than 160 publications and more than 100 patents. Among his many accomplishments were the synthesis of steroids and sex hormones and the production of commercially viable amounts of cortisone (an early pain-relieving treatment for otherwise crippling arthritis) and of a fire-fighting foam, many based on extracts from soybeans and yams. The remarkable part of his work is that through chemical means, he and his co-workers learned to produce human hormones and steroids from plant extracts.

In 1954, he established the Julian Laboratories, which specialized in creating synthetic cortisone, which he later sold for $2.3 million to be a subsidiary of Smith, Kline and French Laboratories. In 1964, he organized Julian Associates, Inc., and the Julian Research Institute, through which he continued to do chemistry experiments and to provide advice to other chemical companies.

Julian died on April 19, 1975, and was buried in Elm Lawn Cemetery in Elmhurst, Illinois.

Julian received many awards and citations, including election to the National Academy of Sciences and the National Inventors Hall of Fame. In 1993, a stamp was issued in his honor by the U.S. Postal Service in its Black Heritage Series. In 2007, he was honored by a joint resolution of the House of Representatives and the Senate of the U.S. Congress. On February 6, 2007, PBS broadcast a two-hour special in his honor as part of the NOVA: Lives in Science series, which also included Galileo, Sir Isaac Newton, and Albert Einstein.