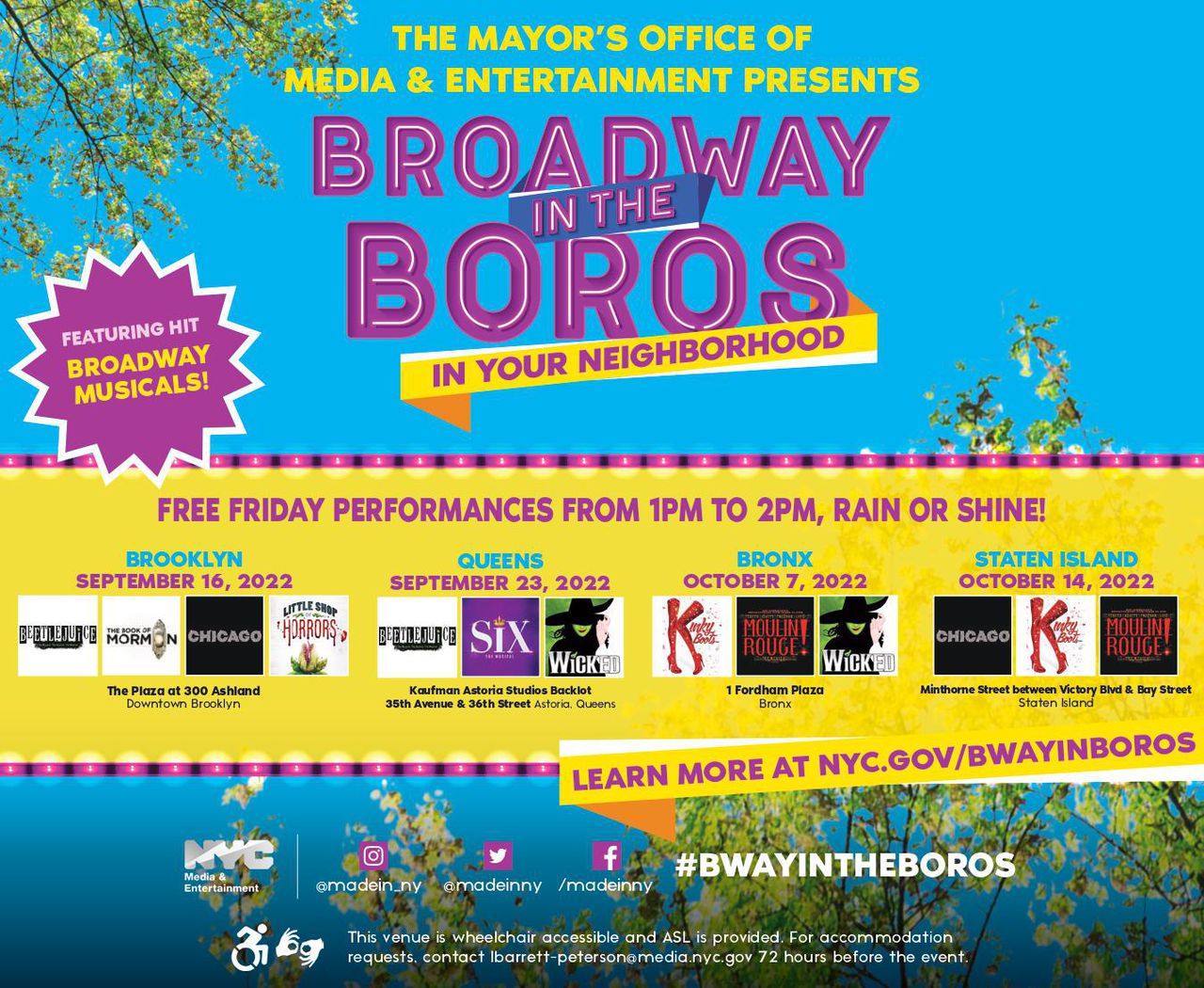 The Mayor’s Office of Media and Entertainment (MOME) today announced the return of its popular ‘Broadway in the Boros’ series, which features live performances in New York City neighborhoods outside Manhattan by cast members and musicians of current Broadway musicals. Back for a fifth run, after a two-year hiatus due to the pandemic, the shows are free, live, family-friendly, open to the public and feature wheelchair and American Sign Language accommodations. More information is available at nyc.gov/bwayinboros.

“After two long years, I am thrilled to see our city continue its reopening with the return of ‘Broadway in the Boros,’” said New York City Mayor Eric Adams. “This remarkable series works to ensure that everyone in our city, regardless of their zip code, gets the chance to experience the magic of Broadway right in their backyards. Broadway is a lifeblood of our city, and this series is an incredible way for all New Yorkers to come out and relish in the magic that makes New York City’s heartbeat.”

“We are thrilled to announce the return of ‘Broadway in the Boros,’ which will bring the amazing talent and spectacle of Broadway to communities across NYC this fall,” said Commissioner of the Mayor’s Office of Media and Entertainment, Anne del Castillo. “After a two-year hiatus in the wake of the pandemic, this signature series offers a wonderful opportunity for New Yorkers to come together and celebrate these incredible shows that draw people from all over the world to our beloved city.”

All ‘Broadway in the Boros’ events take place Fridays from 1:00pm to 2:00pm, rain or shine. In addition to the performances each event features Broadway show ticket and t-shirt giveaways. All performances are hosted by Julie James, Broadway and Sirius XM Radio Personality.

‘Broadway in the Boros’ aims to increase access to the magic of Broadway to all New Yorkers throughout Brooklyn, Queens, The Bronx, and Staten Island. These unique outdoor events celebrate the city’s vibrant and diverse cultural hubs, and are presented in centrally located public spaces and plazas where local communities, and those working there, can gather.

The Brooklyn performance at The Plaza at 300 Ashland is made possible by support from Two Trees Management Co.

The Staten Island performance is in partnership with NYC Department of Transportation’s (DOT) Open Streets Program. New York City is home to the nation’s largest Open Streets program, first launched in April 2020 as a way to make the city’s streets car-free.

Production support is provided by CSM Sport and Entertainment and the MOME production crew, some of whom are graduates of the Theatrical Workforce Development Program (TWDP) Boot Camp, produced in partnership with the Roundabout Theatre Company.

Video and photo assets from past ‘Broadway in the Boros’ events are available. To participate in the conversation on social media, please use #BWAYINTHEBOROS and follow MOME on Twitter and Facebook at @madeinny, and on Instagram at @madein_ny.

“Kinky Boots is thrilled to be a part of the ‘Broadway in the Boros’ series to celebrate the theatre community’s resilience with our fellow New Yorkers, who have supported this show wholeheartedly since we first opened and won the Tony Award for Best Musical in 2013, and continue to lift us up on our return to New York this year,” said Kinky Boots producers Daryl Roth and Hal Luftig.

“There’s no better audience in the world than in New York City! Little Shop of Horrors has been eating up the love, laughter, and shrieks of New Yorkers since the 80s, and we can’t wait to come to Brooklyn to belt our ‘roots’ off alongside Broadway’s finest on Sept 16,” said Little Shop of Horrors producer Rob Ahrens. “We’re so grateful to MOME and ‘Broadway in the Boros’ — we promise not to feed them to Audrey II!”

“SIX is delighted to perform for our neighbors who make New York City such a vibrant place to live, and to say thank you to all who support the healthy return of live theatre,” said SIX producer Kevin McCollum.

“We are so happy to be taking Chicago out to the ‘boros’ to celebrate Broadway’s return with our fellow New Yorkers,” said Chicago Producers Barry & Fran Weissler.

“Broadway is Back! Thank you to the Mayor’s Office of Media and Entertainment for bringing some of the best entertainment NYC has to offer directly to the people. This is a great use of Downtown Brooklyn’s public space,” said Brooklyn Borough President Antonio Reynoso.

“I’m thrilled to welcome back ‘Broadway in the Boros’ in Queens this year! The World’s Borough has no shortage of first-class entertainment, but the more the merrier. We can’t wait to see our neighbors from Broadway make Kaufman Astoria Studios their own for a day,” said Queens Borough President Donovan Richards Jr. “I hope our families come out to enjoy the festivities.”

“Arts and entertainment are a crucial part of our city`s culture and with the return of ‘Broadway in the Boros,’ the magic of Times Square is coming close to home,” said The Bronx Borough President Vanessa Gibson. “While the price of a Broadway show can be inaccessible for many families, ‘Broadway in the Boros’ provides access to top performers in Moulin Rouge! The Musical, Kinky Boots, and other critically acclaimed shows free of charge. I want to thank Mayor Adams, the Mayor’s Office of Media and Entertainment, and our incredible actors and entertainers for their dedication to providing free and accessible entertainment across all five boroughs.”

“We are pleased to welcome the return of “Broadway in the Boros” to Staten Island this year. As New Yorkers and visitors return to the Big Apple, we encourage them to explore Staten Island attractions, restaurants, shops and more with a trip to this free Broadway performance sponsored by the Mayor’s Office of Media and Entertainment,” said Staten Island Borough President Vito J. Fossella. “We would like to extend our gratitude to Commissioner Anne del Castillo for once again bringing this program to the borough, and we look forward to many Staten Islanders enjoying the best of what Broadway has to offer on Minthorne Street this October.”

“I’m excited to welcome Broadway back to Brooklyn! The ‘Broadway in the Boros’ program is a great example of how we can use public space to bring community members together and increase access to the performing arts,” said Councilmember Lincoln Restler.

ABOUT THE MAYOR’S OFFICE OF MEDIA AND ENTERTAINMENT:

The Mayor’s Office of Media and Entertainment’s mission is to support and strengthen New York City’s creative economy and make it accessible to all. In 2019, the creative industries accounted for more than 500,000 local jobs and have an economic impact of $150 billion annually. MOME comprises five divisions: The Film Office, which coordinates on location production throughout the five boroughs; NYC Media, the City’s official broadcast network and production group; the Office of Nightlife, which supports the city’s nighttime economy; the Press Credentials Office, which issues press cards; and Programs and Initiatives to advance industry and workforce development across NYC’s creative sectors.